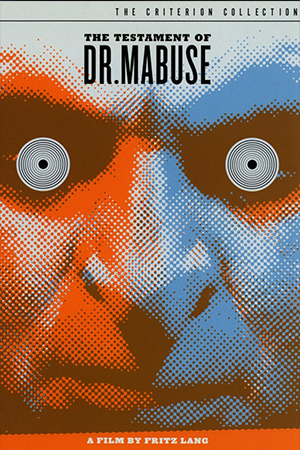 The Testament of Dr. Mabuse

Berlin police commissioner Karl Lohmann (Wernicke) is investigating a series of crimes against the state that appear to be the work of one Dr. Mabuse (Klein-Rogge), a master criminal locked in a lunatic asylum for his murderous schemes. When Lohmann visits the institution to interview his chief suspect, a deviant known for his mind-control abilities, the warden, Professor Baum (Beregi), delivers a shocking bit of news: Mabuse is dead. But is he really?

Completed shortly before director Lang fled Nazi Germany, "Testament" is a creepy sequel to his silent thriller "Dr. Mabuse, the Gambler." With its talk of master plans and shadowy henchmen taking orders from a disembodied authoritarian voice, it's easy to grasp the parallels to Hitler. (The Nazis, of course, promptly banned the film.) A subplot involving a reluctant member of the Mabuse syndicate (Diesel) who hopes to flee with his lover Lilli (Lieseem) adds another suspenseful dimension. See this for the knotty intrigue, incomparable atmosphere, and thrilling, impeccably directed escape sequences.