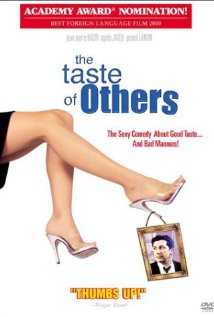 The Taste of Others

Crass, middle-aged bourgeois Jean-Jacques Castella (Bacri) toils away at the factory he owns to support his affluent but unexciting life. One night, while attending a performance of Racine’s tragic “Berenice” with his spoiled, childlike spouse, Castella experiences an epiphany, and becomes obsessed with the lead actress, Clara Devaux (Alvaro). Somewhat clumsily, he begins to infiltrate her social circle. Though Clara thinks Castella is a philistine with no redeeming values, he is determined to prove himself worthy of her attention.

Like a good sparkling wine, Jaoui's "Taste" wears its sophistication lightly. Co-writer Bacri is utterly convincing as a man who finds himself immersed in a world of art and artists where his boorish, unrefined graces make him an outcast. Yet it's a soul-nourishing environment, and Castella persists despite Clara's apparent lack of interest in his friendship. Jaoui handles her actors with breezy confidence, and even plays a juicy role herself as a hash-selling barmaid, Manie, who tames Castella's philandering bodyguard (Gérard Lanvin). Clever and refreshingly civilized, this ensemble drama won an Oscar nod for Best Foreign Film.

The Taste of Tea