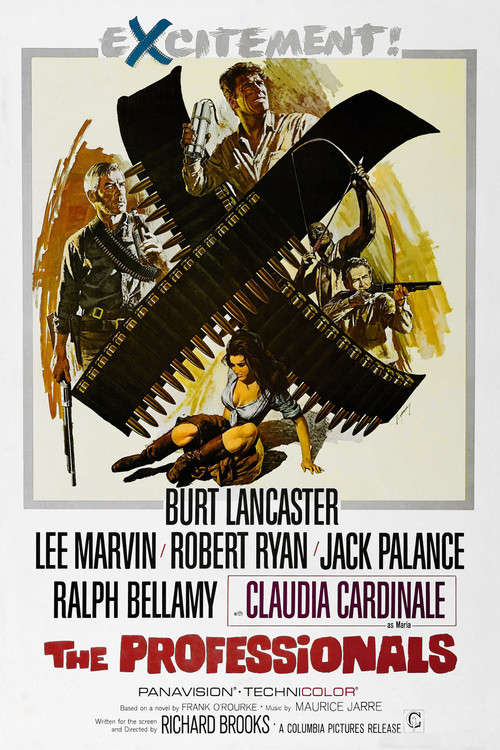 When a lawless Mexican revolutionary named Raza (Jack Palance) abducts the gorgeous Maria (Cardinale) for ransom, wealthy Texas rancher Grant (Ralph Bellamy) hires the only men he knows have a chance of rescuing his wife: horse trainer Hans (Robert Ryan), tracker and longbow expert Jake (Woody Strode), and stoic leader Fardan (Marvin), who posts bail to recruit his womanizing best pal, explosives pro Dolworth (Lancaster), for this tricky job. The trek is dangerous, with bandidos in the canyons and Raza's trigger-happy watchmen on patrol, but with $10,000 each on the barrelhead if they bring Maria back, the men are highly determined.

Richard Brooks's self-penned, high-energy Western, set in the waning years of the Mexican Revolution in 1917, is a tense, gritty and exciting horse drama. The teaming of Marvin and Lancaster, playing Raza's disenchanted ex-amigos, works brilliantly, while Strode and Ryan offer fine support as talented sidekicks. Italian bombshell Cardinale, in her first English-speaking role, provides plenty of fiery va-va voom, too, especially in league with Palance's rough-riding Raza, who proves to be quite a romantic himself. Filmed on location in Nevada, "The Professionals" is a rousing, thoughtful action movie that deals with questions of money versus morality, and the last gasp of noble frontier idealism.