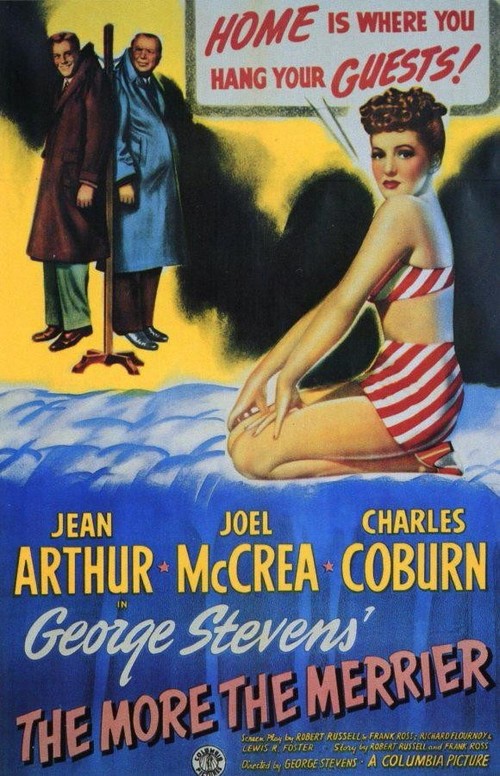 The More the Merrier

During the Second World War, our nation’s capital experienced a severe housing shortage. Connie (Arthur), an independent, plucky girl who wants to do her part as a patriotic American, decides to sublet half her flat. She gets more than she bargained for in Benjamin Dingle (Coburn), a charming but meddling older gentleman who decides Connie’s stuffy fiancée Pendergast (Gaines) isn’t the right choice for her. He brings in his own candidate, subletting half his room to the tall, affable Joe Carter (McCrea), much to the (initial) chagrin of the landlady. Thus the stage for a “roommate romance” is set.

A sharp, fast script and winning chemistry among the three stars propel this timeless wartime comedy. Director Stevens gleefully unleashes these three characters on each other in a confined space, and hilarity follows. No one could play the quick talking, neurotic modern woman better than Jean Arthur, and the underrated McCrea fits the tricky role of straight man to a tee. Still, it’s the hysterically deadpan Coburn who steals it, winning himself an Oscar in the bargain. Importantly, the film never lets all the humor overwhelm delicately blossoming love. It’s a sweet, smart, screwball romance from the heyday of Hollywood — “More” like this, please.

The Most Dangerous Game