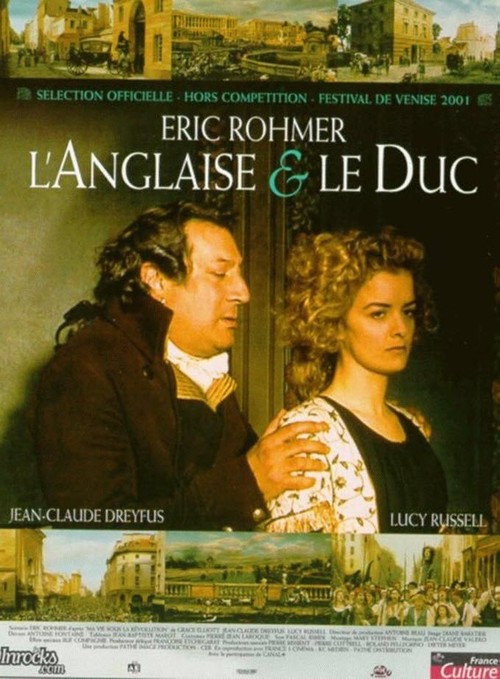 The Lady and the Duke

On the eve of the bloody French Revolution, Grace Elliott (Russell), a Scottish expat living in Paris, finds herself in a precarious position. Her former lover, the Duke of Orleans (Dreyfus), urges her to leave France, while she in turn encourages him to abandon the cause of the revolution. In a series of tense drawing room discussions, the two debate the nature of the uprising, and what it will mean for France. Fast-forward two years hence: the beheadings are in full swing, and the revolutionaries suspect Grace of aiding and abetting the monarchist cause. Can the Duke protect his former flame, or will doing so put his own life at risk?

Eric Rohmer, mostly known for low-key, intimate conversation pieces that dissect male-female relations in present-day France, here attempts something quite daring and atypical — and succeeds. In this lush and literate period drama, the director chose to shoot his actors against blue-screens and then digitally insert backdrops composed of paintings from the era. This highly original visual conceit produces rich, arresting images, while also serving to focus the film on what Rohmer has always done best: creating fascinating conversation between men and women. The lady's interactions with the duke are charged with hints of their former passion, and Dreyfus and Russell prove to be perfect sparring partners for Rohmer's ingenious, philosophically-minded screenplay.

The Lady from Shanghai