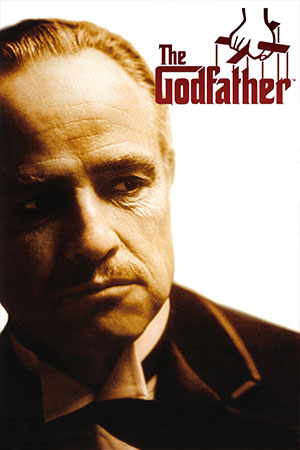 This brilliant, bloody saga traces the turbulent reign of aging Mafia patriarch Don Vito Corleone (Brando) and his son, Michael (Pacino), a decorated war veteran in 1940s New York who has no intention of joining the family business. But after Don Vito is victimized by a rival who wants to move heroin through his turf, Michael elects to seek vengeance, and is then forced to hide out in Sicily. It's only a matter of time before Michael returns to inherit the mantle from his recuperating father.

Long before "The Sopranos," a young Coppola transformed our understanding of the relationship between organized crime and corporate American profiteering with this operatic ode based on Mario Puzo's acclaimed novel. Moody and violent, "Godfather" combines a bullets-blazing mobster film with a gripping family saga. And what a cast: Pacino, Robert Duvall, James Caan, and Diane Keaton are all superlative. Brando, of course, achieved yet another level of cinematic fame with his stunning portrayal of the title character. Coppola fought with Paramount to achieve his personal vision, but ultimately triumphed, winning the 1972 Oscar for Best Picture.