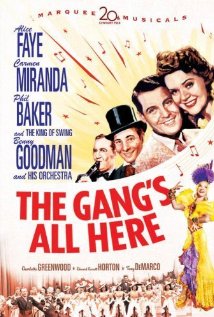 The Gang's All Here

Turning on the charm to woo down-to-earth chorus girl Edie Allen (Faye), wealthy serviceman Sergeant Andy Mason Jr. (Ellison) shares a romantic evening with Edie on the Staten Island Ferry, omitting the fact that he’s a Wall Street tycoon's son and informally engaged to be married. Months later, returning from the Pacific as a war hero, Mason will have to choose between Edie and another at a lavish party thrown by his father.

Berkeley's morale-boosting WWII musical has more than tart comic turns (especially by Edward Everett Horton) and a soapy romantic plot to recommend it — there's the audacious Carmen Miranda for one thing, backed by Benny Goodman's crackerjack orchestra. Yet, it's the unearthly choreography, wild crane shots and camera swoops, and proto-psychedelic lighting and set design that sets this extravaganza apart from other musicals of the era. (Sit through "The Lady in the Tutti-Frutti Hat," and you'll wonder what got slipped into your soda pop!) One of Berkeley's most technically accomplished films, this toe-tapping, kaleidoscopic fantasy really will blow your mind, dated touches aside.

The Garden of the Finzi-Continis