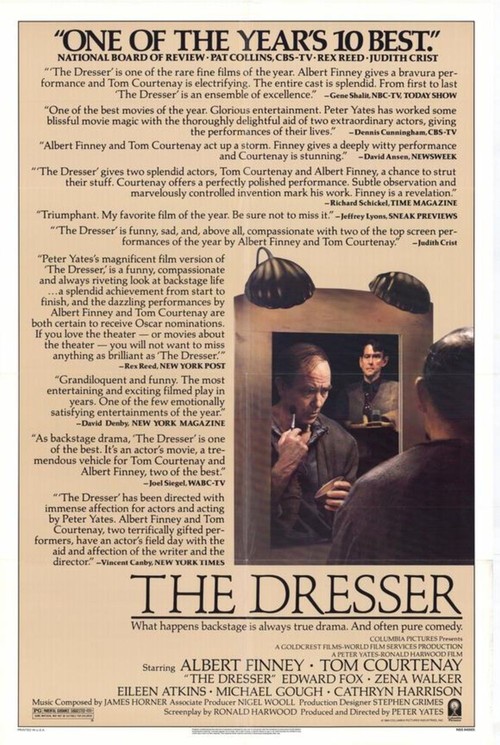 Addressed as "Sir" by devoted backstage assistant Norman (Courtenay), an aging Shakespearian actor (Finney) performs "King Lear" with his troupe in the English provinces as German bombs drop during the Blitz. Something of a cross between a nurse and a coach, the effeminate Norman helps Sir with his lines, his outfits, and his moods. But as Norman basks in the reflected glow of this distinguished player, the man himself crumbles from within.

In Peter Yates's wonderful "Dresser," the wartime buffeting of Britain mirrors the physical and mental collapse of a weary thespian, who has performed "Lear" hundreds of times, but now can't even remember his opening lines. Courtenay is every bit Finney's equal as Norman, the actor's intensely loyal, long-suffering "dresser," and the only person who can get "Sir" onstage for each performance. The gifted Eileen Atkins also resonates as Madge, the company's spinsterish stage manager whose quiet love for "Sir" has always competed with Norman's. Anchored by two outstanding lead performances, "The Dresser" is a poignant elegy to life behind the curtain.