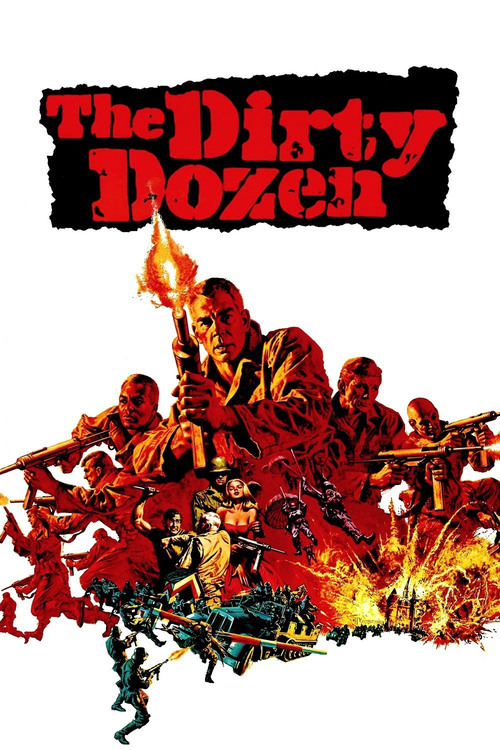 In the months prior to D-Day, court-martialed misfit Major Reisman (Marvin) is given a last chance to rehabilitate his reputation by smug, hard-nosed General Worden (Borgnine), who gives him the task of raiding a conclave of top Nazi officers in occupied France with a suicide squad of 12 convicted felons. Under Reisman's command, this motley group of bad guys — including former mobster Franko (an Oscar-nominated Cassavetes), pervert Maggott (Savalas), moron Pinkley (Sutherland), homicidal Wladislaw (Bronson), and tightly-wound Jefferson (Brown) — are subjected to torturous combat training and molded into an efficient fighting unit. With no promises of clemency on their return, the men embark on a mission most will never come back from.

Director Aldrich's brutal, ultra-macho action movie is so indignant about the hollow integrity of religion, patriotism, establishment values, and the military brass that it was bound to find a sizable audience in 1967, as the nation found itself mired in Vietnam, with many questioning the rationale for the war. Explosively violent and spiked with whip-smart black humor, "Dozen" fused crowd-pleasing spectacle with curdled cynicism, boasting a dream team of Hollywood stars acting at the top of their games. One of MGM's highest-grossing films, "Dozen" has never waned in popularity and still packs a potent, anti-authoritarian punch.

The Disappearance of My Mother