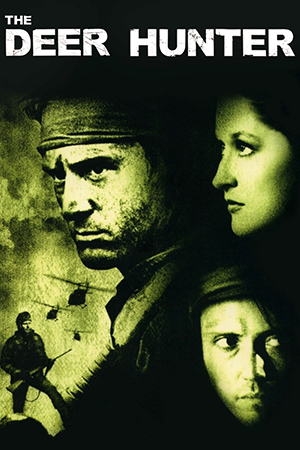 When we first meet three young steelworkers from Western Pennsylvania — Michael (De Niro), Steven (Savage), and Nick (Walken) — the men, friends since childhood, are celebrating Steven's marriage, while Mike and Nick take turns flirting with Linda (Streep). Then, all too abruptly, the trio gets shipped over to Vietnam for active duty. Soon they are captured by the Vietcong and are forced to endure the misery and torture of a North Vietnamese POW camp. Though eventually they manage to escape, none are home free yet.

Solid Vietnam films abound, but few pack the wallop of this highly intense, disturbing feature from then-newcomer Michael Cimino. Beyond the graphic scenes of the group's inhuman, unbearable captivity, the film shakes us up even more in the aftermath, as the stalwart Michael goes searching for his old friends, a perilous and selfless act of love and loyalty. This gut- and heart-wrenching feature won Best Picture, Director, Screenplay, and Supporting Actor Oscars (the last for Walken, who is unforgettable.) Streep also got her first nod for this. One of the all-time champs, but definitely not for the squeamish.