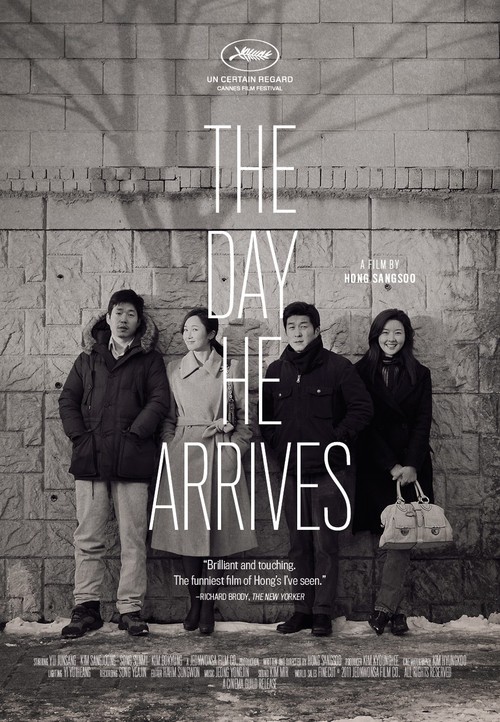 The Day He Arrives

A filmmaker Seong-jun (Yoo) returns to Seoul to reconnect with an acquaintance named Young-ho (Sang-joong Kim). Unable to find his friend, he goes out for dinner alone and meets some fans of his work. Later that night, he drunkenly visits an ex-girlfriend Kyung-jin (Bo-kyung Kim). The next day, he finds his friend and goes drinking in a bar, where the owner is a dead ringer for Kyung-jin. The next few days unfold in a similar, oddly repetitious way; Seong-jun meets the same people on the street, returns to the same bar, and continues conversing on familiar topics.

Director Hong continues his introspective work with a story of creative blockage told with cinematic nods to both Woody Allen (specifically "Stardust Memories") and the French New Wave. The meandering, seemingly random scenes amount to a portrait of an artist who is stuck in some sort of professional and emotional stasis. Conversations flow in long, unedited wide shots; the occasional zoom draws attention to the camera and emphasizes the strange, recurring situations. The name of the bar is "Novel," and that's clearly ironic, as the film concerns the ruts and routines in our lives that stifle our capacity to consider fresh approaches, take risks, and (really and truly) create. This existential puzzler questions, probes, but ultimately rewards. Seize this "Day!"

The Day I Became a Woman