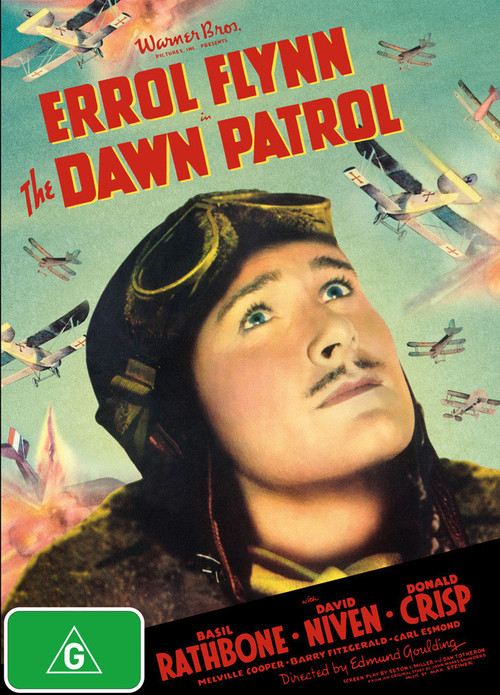 At the French headquarters of the British Royal Flying Corps, squadron commander Major Brand (Rathbone) is berated by WWI flying ace Capt. Courtney (Flynn) for sending young, inexperienced pilots to their deaths over enemy lines in rickety planes. But after Courtney is reassigned to Brand's position, he begins to realize the brutal, agonizing realities of deciding who will fly those daily — and almost always deadly — early morning missions.

A scene-for-scene remake of Howard Hawks' 1930 film of the same name, "Patrol" is an anguished World War I flier drama starring the dashing, seemingly unflappable Flynn, who inhabits his role with heroic gusto. Goulding wrenches great emotion out of the massacre-of-innocents scenario, dropping in on the doomed men as they quaff scotch and listen to the melancholy sound of the airmen's gramophone before hopping into their jerry-built "crates." Rathbone is excellent as the tortured desk commander accused of the gravest cynicism, and real-life Flynn bosom buddy David Niven supplies an additional punch as Courtney's best man, Lt. Scott. See "Dawn Patrol," a high-flying combat adventure with a conscience.

The Day After Trinity