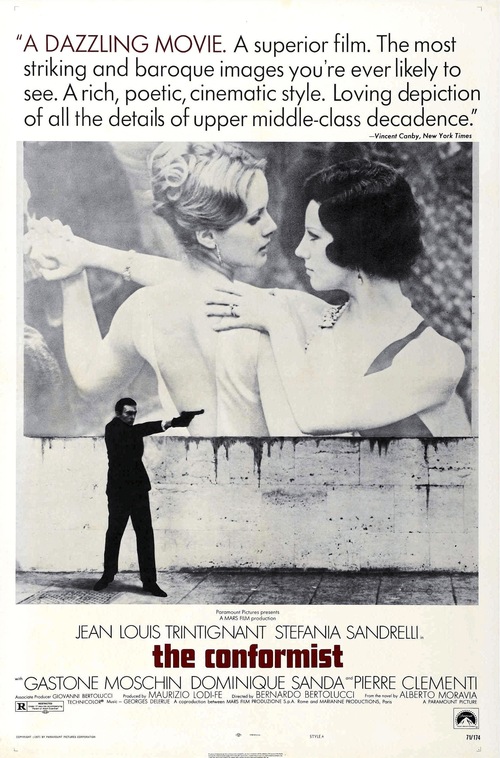 Haunted by the memory of a brutal sexual trauma from his childhood, Marcello Clerici (Trintignant) has always sought to fit in with "normal" society, marrying dull bourgeois Giulia (Sandrelli) and then joining the Italian Fascist party. In 1938, Marcello is recruited by the Secret Service to assassinate his former mentor, Professor Quadri (Tarascio), now a prominent dissident in Paris. As he waits for his final orders in a neon-lit hotel room, we see the trajectory of his life and conflicts, both sexual and political, through a series of flashbacks.

Based on a novel by Alberto Moravia, Bertolucci's provocative, dramatic thriller explores the twisted psychology of Mussolini-era Fascism and its eventual demise as played out in the assassination drama of Marcello, who becomes perversely attracted to his target's bisexual wife, the alluring Anna (Dominique Sanda). Bertolucci's handling of the interlocking flashbacks, his exquisite sense of pacing, and the wonderfully fluid camerawork of lens man Vittorio Storaro all lend an additional harmony to this fascinating Technicolor tale of doomed decadence and latent desire in Fascist Italy. And what about that sizzling Sanda/Sandrelli tango?