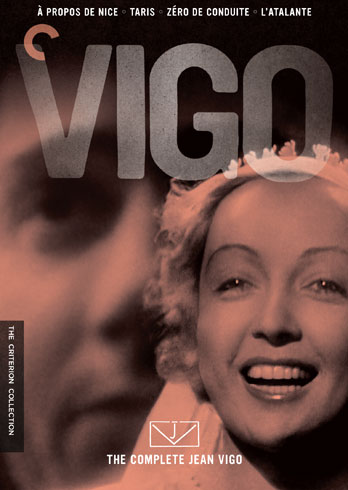 This painstakingly restored set from Criterion compiles all four films in brilliant director Jean Vigo’s all-too-brief span behind the camera, beginning with his first three short films: “A Propos de Nice” (1930, 21 minutes), a playful and arresting documentary portrait of the famed resort city in the late twenties; “Taris” (1930, 9 minutes ) a meditation on the poetry of motion as Vigo profiles champion swimmer Jean Taris doing what he does best; and finally, the more ambitious “Zero de Conduite” (1933, 41 minutes), a strange, fascinating tale of anarchic foment among students at a repressive boarding school. Then there’s Vigo’s swansong: “L’Atalante” (1934, 83 minutes), about a young couple who begin married life on a Paris barge. When the young wife gets restless on board, and flees to the city, her bereft young husband mounts a desperate search for her.

Vigo had a sublime gift for melding the natural and the surreal; for endowing realistic images and situations with a fantastic, almost dreamlike quality. Tragically, tuberculosis cut short his career (Vigo died shortly after the release of “L’Atalante,” at age 29). Still, his contribution stands right alongside that of contemporaries Jean Renoir and Luis Buñuel. Sadder still, Vigo never knew success in his lifetime, as authorities were offended, and critics mostly baffled, by his output. The young artist died in debt, and his film legacy, particularly “L’Atalante,” would only receive proper recognition after the Second World War. These precious works have been largely unavailable up to now, so this remarkable Criterion set is a “must-own” for all lovers of timeless film.