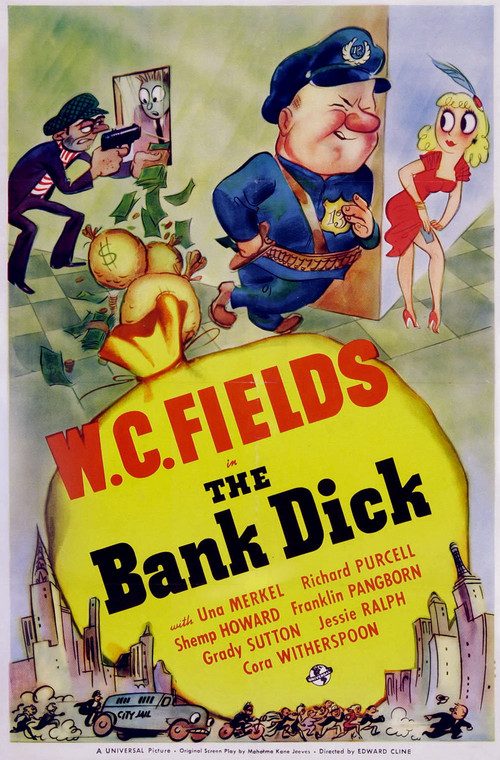 Egbert Souse (Fields), with an "accent grave over the "e'", is a hen-pecked tippler who spends most his time hiding out at the Black Pussycat Café (read: Saloon). When he inadvertently foils a robbery, Egbert is hired as guard for the local bank. Complications ensue when Egbert convinces fellow bank employee and prospective son-in-law Og Oggilby (Sutton) to embezzle funds to invest in a beefsteak mine. Then the bank examiner (Pangborn) shows up! Even when the chips are down, Souse will go to most any lengths to save the day.

Though his work is not to everyone's taste, we view Fields as a comic genius right alongside Chaplin and The Marx Brothers. Along with his classic "It's A Gift", "The Bank Dick" remains his most sustained piece of hilarity. A brisk outing at just over 70 minutes, the film is full of priceless Fieldsian dialogue, and strikes just the right balance between nutty plot intrigue and broad slapstick. A "must" for comedy fans- and you can take that to the bank! (Trivia note: look fast for fourth "Stooge" Shemp Howard playing a bartender.)