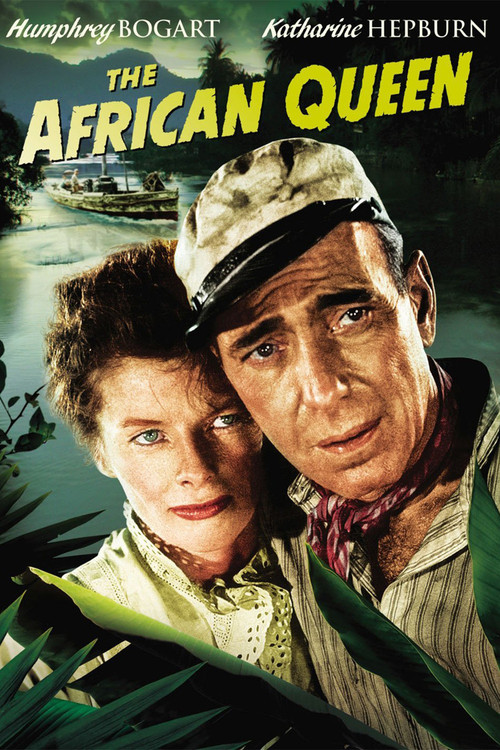 Coarse-tongued, boozy steamer captain Charlie Allnut (Bogart), a supplier of trade goods to East African villages during WWI, offers to take prim, imperious Rose Sayer (Hepburn) back to civilization after her devoted brother, a British missionary, dies during a German attack. Charlie and Rose have an oil-and-water rapport, but over the ensuing days, as they face a gauntlet of perils on the arduous journey home, their mutual hostility softens and then turns much sweeter.

Scripted by James Agee, Huston's hugely entertaining "Queen" pairs a grizzled Bogart with the lovably straitlaced and ever-haughty Hepburn. Together they share a bumpy ride down a treacherous river, where a German gunboat is lurking, along with leeches, rapids, and (surprise!) romance. According to Hepburn's memoir (and several books), it was an arduous location shoot for everyone concerned, but the effort paid off, as  DP Jack Cardiff renders the humid environs of East Africa in majestic, eye-popping Technicolor. Still, what really sets this film apart are the star turns, particularly from Bogie, who nabbed the Oscar for this. It's true: opposites attract!

The Age of Innocence