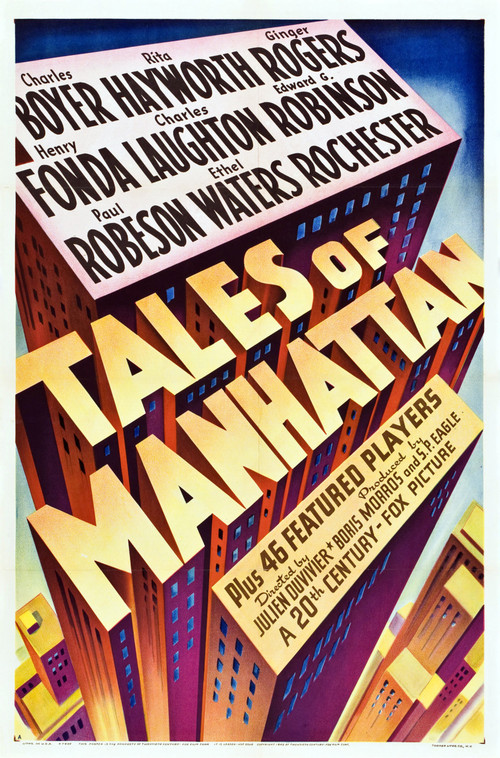 A custom-made tailcoat is cursed and said to bring misfortune to whoever wears it. The original owner, a successful actor (Boyer), is in love with the beautiful Ethel (Hayworth), but she has a distrustful, gun-wielding husband (Mitchell). The tuxedo jacket next passes to a wealthy playboy (Romero) whose fiancee (Rogers) is rightly suspicious of his philandering ways. Subsequent wearers include a struggling composer (Laughton), a down-on-his-luck alcoholic (Robinson), and a poor sharecropper (Robeson).

An anthology of vignettes is a stellar way to jam-pack the screen with stars and more stars! Watch for Laughton’s real-life wife Lanchester playing the musician’s loving spouse, the suave Sanders popping up as a caddish varsity man, and Fonda as a suddenly love-struck bachelor. Other highlights include Joseph Walker’s moody cinematography on the noir-ish Boyer/Hayworth segment, and Robeson’s rich baritone voice joined by the Hall Johnson choir to end the film. The tailcoat may just be a cinematic device, but its odyssey unites some of Hollywood’s greatest names and talents in this series of uplifting, entertaining stories. Devour these “Tales”!

Tales of the Night