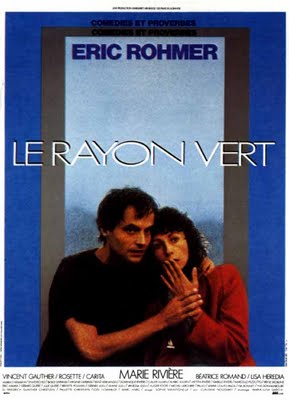 It is August in Paris, the time when everyone vacates the city and heads to an idyllic spot on the sea or in the mountains. However, secretary Delphine (Rivière) is disillusioned, since her friend just ditched her and their travel plans. For her, summertime has suddenly become very lonely, despite the well-meaning invitations of sympathetic friends. Bored and a bit peeved at her circumstances, Delphine embarks on a restless search for good company.

This heartfelt, mostly improvised study of ennui and romantic disappointment by New Wave auteur Rohmer avoids the pitfalls of most Hollywoodized single-female dramas: the pacing is unhurried, the dialogue spontaneous, and the revelations understated; it is a compelling film for precisely these reasons. Delphine is not an easygoing character — she complains, she vents her frustration, she rudely lectures her gracious hosts about her vegetarianism over dinner — but Rivière brings a humanity and complexity to her character that's authentic and arresting. Take a chance on "Summer" and you'll be rewarded with a "green ray" of joy, like the one that eventually lights up Delphine.