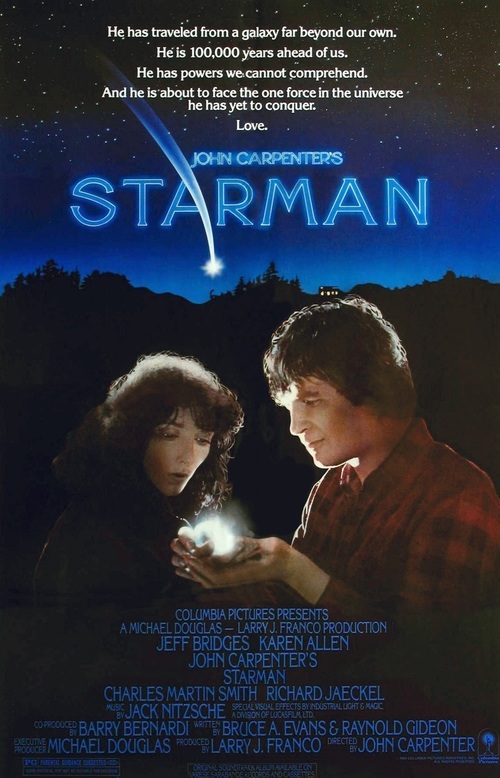 In this sci-fi charmer, a non-hostile alien force lands on earth, enters the house of young widow Jenny Hayden (Allen), and scans the likeness of her dead husband (Bridges) to take human form. Jenny and the alien end up on an unlikely road trip, racing to a rendezvous spot with the spaceship which will take him home. Meanwhile, government forces (led by Jaeckel) are on their trail. As Jenny spends more time with her unlikely new companion, feelings of sympathy and affection develop — not surprising, since this extra-terrestrial so closely resembles her departed spouse.

Made just two years after Steven Spielberg's "ET: The Extra-Terrestrial," "Starman" invites comparison, but there's a lo-tech charm and simplicity to this film that makes it unique. Bridges was singled out for his disarming portrayal of the visitor with Best Actor nominations from both the Academy Awards and the Golden Globes, and it's easy to see why. Rather than opt for make-up to enhance his otherworldliness, Bridges achieves the desired effect with expression, inflection, and locomotion. Primarily due to his inspired turn, this "Starman" continues to dazzle.