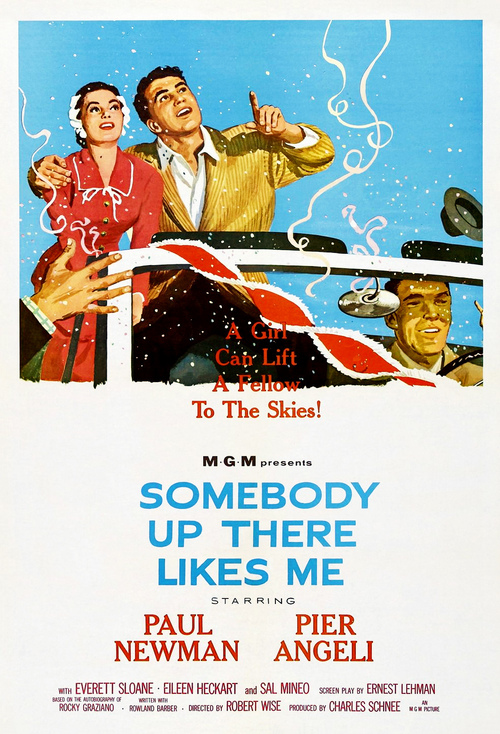 Somebody Up There Likes Me

Disadvantaged from the start, Rocky (Newman) seems destined for a life of crime. Born in Brooklyn to a drunken, disappointed father (Stone) and nervous but loyal mother (Heckart), he spends most his time with delinquent friends like Romolo (Mineo) or in jail. The one thing the awkward thug has going for him is the passion to fight — that and a sledgehammer punch. Rocky becomes a celebrated middleweight who also wins the girl of his dreams, Norma (Angeli). But just when he seems to have the world by the tail, his past threatens to destroy his chances for long-lasting happiness.

Based on Rocky Graziano's autobiography, "Somebody" clearly inspired many boxing films yet to come — but this earlier feature wins extra points for charm and bigheartedness. In a star-making role originally intended for James Dean, Newman is nearly unrecognizable as the rough but likable title character. He's helped by a solid supporting cast (including a luminous Angeli), masterful direction by Wise, and a surprisingly funny, touching script by Ernest Lehman. The movie won Oscars for cinematography and art direction, and there's an embarrassment of riches in acting debuts (Robert Loggia, Dean Jones, Steve McQueen). Settle into your favorite ringside seat, and get ready for this knockout of a biopic.