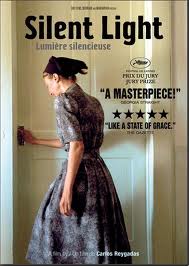 Quiet, good-natured Johan (Fehr) lives with his longtime wife Esther (Toews) in a remote Mennonite community in rural Mexico. Though his faith is strong, he is wracked with guilt over his full-blooded, almost spiritual love for Marianne (Pankrantz), with whom he's been having an affair in plain view of family and friends. Even openly confessing his sin to his wife and best friend Zacarias (Klassen) hasn't eased his conscience or tempered his passion. Then fate intervenes.

The strain between ultra-traditional faith and carnal desire, betrayal and grace gets a subtle but powerful reworking in “Light,” the mesmerizing third feature by Mexican auteur Carlos Reygadas, whose visual style and sensibility harken back to the European art cinema of Bresson and Dreyer. It might be preternaturally quiet and slow-going at first, but this special film gently burrows under your skin, and then builds to a soul-rousing, transcendent finale you won't forget anytime soon.