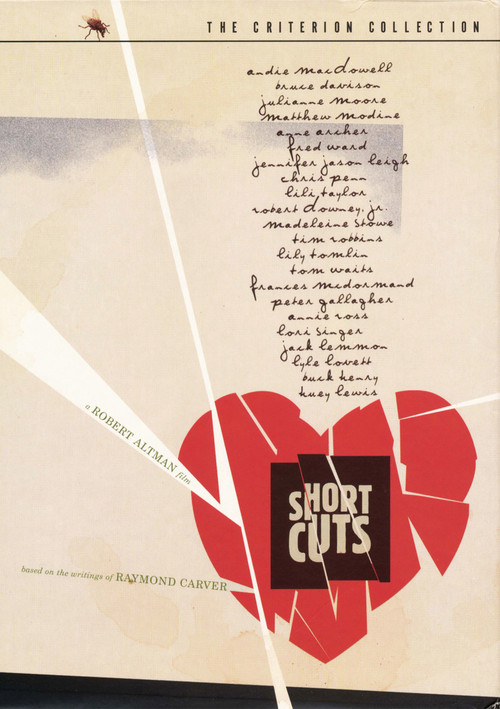 Adapted from Raymond Carver stories, this ambitious film portrays myriad lives intertwining in modern-day Los Angeles, as various couples struggle with love, sex, marriage, and alcohol. Three friends on a weekend fishing trip (Ward, Henry and Huey Lewis) find a woman's dead body but decide not to report it; an aging philanderer (Lemmon) confesses his infidelities to his son (Davison) while his grandson lies comatose after a car accident; the kid's doctor (Modine) agonizes over the suspected infidelity of his artist wife (Moore); and a birthday-cake baker (Lovett) seethes with anger over a trivial slight. These are just some of the stories playing out in the City of Angels.

The inspired match-up of writer Carver and director Altman makes for movie magic in "Short Cuts," a character-driven mosaic that wrings a lot of emotional truth out of its engaging, ever-proliferating storylines (much like the director's earlier film quilt, "Nashville"). You'd be hard-pressed to find a quirkier, more accomplished cast of players, all of whom inject humanity and eccentricity into their various roles. It's hardly short at three hours, but "Short Cuts" offers such enthralling and constantly varying slices of life that you hardly feel the time passing.

Shut Up and Sing