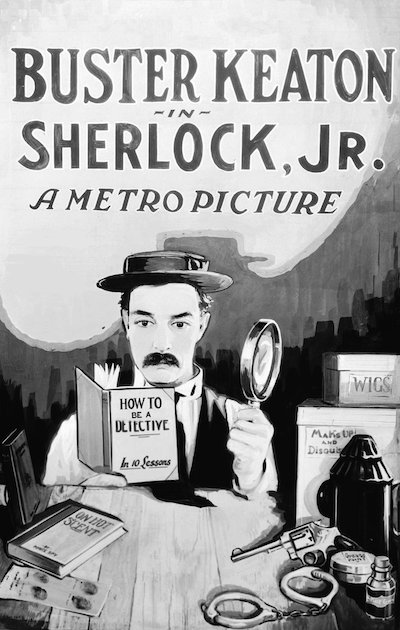 A young film projectionist (Keaton) harbors fantasies of becoming a famous detective. He’s engaged to a beautiful girl (McGuire) but when another one of her suitors (Crane) frames him for theft, she breaks off the engagement. While sleeping on the job, he dreams that he’s entered the movie playing behind him, and that he is indeed a world-renowned private eye in pursuit of some stolen pearls. As the comic caper plays out in his mind, the girl figures out the truth and rushes to his side.

Keaton’s third feature behind the camera is a masterpiece of daredevil stunts, astounding special effects and, of course, his patented, priceless brand of deadpan comedy. One highlight among many: as Keaton’s character “enters” the screen and finds himself in a sequence of bizarre locations, his detective dives through the body of his assistant. That was cutting-edge stuff back in 1924. But most impressive is Keaton’s sheer ingenuity, whether he’s performing trick pool shots or riding a motorcycle perched on the handlebars. The action is swift, non-stop and very funny, with a double happy ending to boot! By all means, investigate “Sherlock, Jr.”!