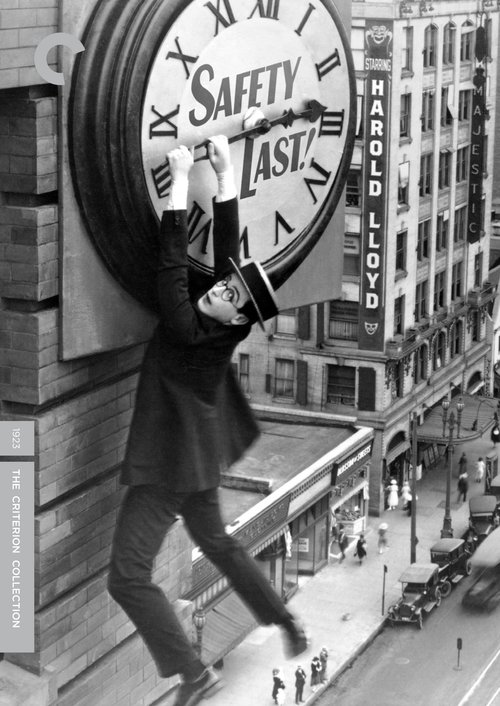 A small-town country bumpkin (Lloyd) leaves his girl (Davis), to make it in the big city, and promises to send for her when he’s made enough money to marry her. He finds work as a lowly store clerk at the fancy DeVore department store, watched over by the imperious floorwalker Stubbs (Clarke). For a publicity stunt that could win his some real money, he asks his pal (Strother), a human fly, to climb the 12 story building of the store. But his friend runs into some trouble with the law, and Harold must scale the facade on his own, dealing with hungry pigeons and a pesky mouse along the way.

Lloyd’s most famous and recognizable work still has the power to thrill with its heart-stopping stunts and ingenious camerawork. The pièce de résistance, Lloyd hanging by his fingertips from a clock face, puts modern-day green screen techniques to shame. Lloyd performed most of his own stunts (despite having blown off a finger and thumb of his right hand in an earlier accident with a supposedly fake prop bomb). His comedy isn’t wholly dependent on stunts, however; whether dealing with a barrage of crazy shoppers or hiding from his landlady, his charisma and humor shine through on the ground, too. Wearing a straw boater and owlish glasses, Lloyd created an indelible character on a par with Chaplin’s “Little Tramp.” And with this gem, he gave us an indelible comedy classic.