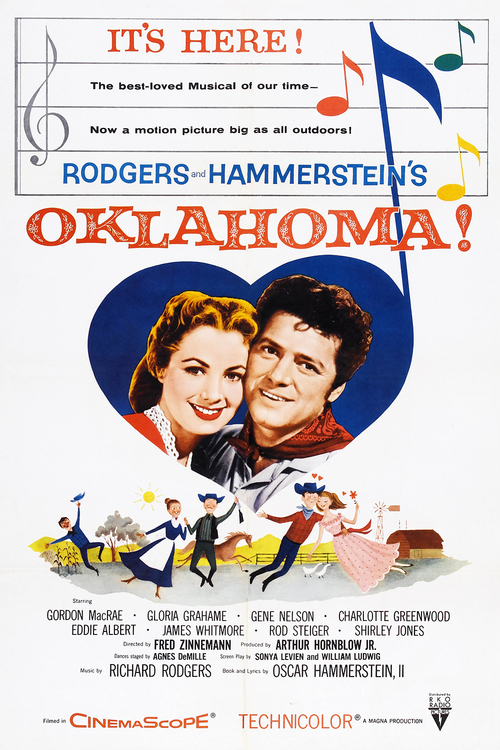 Fox introduced the new singing team of MacRae and Jones in this buoyant musical, adapted from the hit play that launched Rodgers and Hammerstein as a songwriting team. The movie follows the round-about romance of a young couple in the rough frontier days of the early 1900s. Cowboy Curly (MacRae) has eyes for Oklahoma farm girl Laurey (Jones), but so does brutish farmhand Jud Frye (Steiger). When Curly rescues Laurey from Jud's ungentlemanly advances at a social, he also wins her hand, but Jud hasn't sung his last tune just yet.

Though the film is long and contains a fairly high corn factor, it's also visually stunning, and truly soars whenever the music and dancing starts, with peerless renditions of “People Will Say Were In Love,” “The Surrey With The Fringe On The Top,” and the immortal title tune. The dance numbers, choreographed by Agnes de Mille, are original and exuberant, while Steiger and Gloria Grahame turn in fine performances, respectively playing the dastardly Jud and the naively amorous Ado Annie, the girl who can't say no.