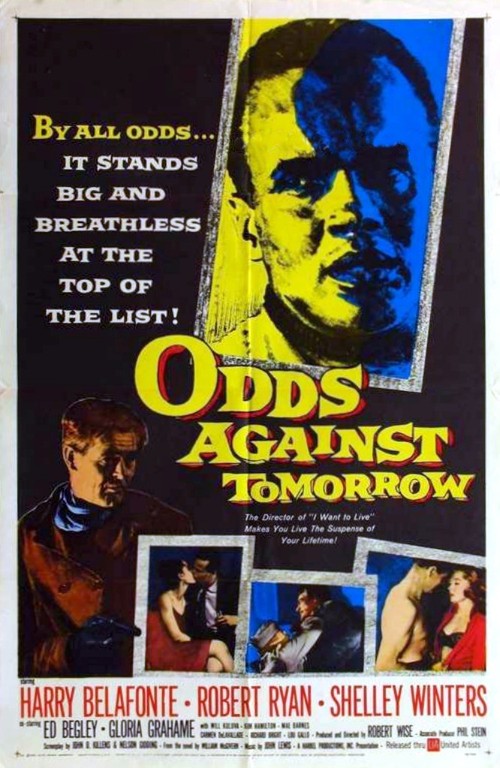 Retired New York cop Dave Burke (Begley) has a failproof plan to rob a small-town bank, so he enlists the help of Earl Slater (Ryan), a bitter ex-con looking for a big payoff, and black nightclub crooner Johnny Ingram (Belafonte), a gambling addict heavily indebted to a mobster. Despite the corrosive rancor between Ingram and Slater, an unrepentantly hostile racist, the three agree to collaborate in the heist, which does not go according to plan.

This nail-biting noir features the estimable talents of Ryan, a progressive in real life who plays a noxious bigot to the hilt, and handsome singer-actor Belafonte, showing a decidedly less wholesome side here. Director Wise and writer Abraham Polonsky add complexity to both characters, detailing the gnarled emotions Slater has for well-meaning girlfriend Lorry (Winters) and sexy upstairs neighbor Helen (Gloria Grahame), while depicting Ingram’s barely concealed desperation, as he attempts to revive a marriage that’s crumbled due to his gambling habits. It’s all downhill from there, as everything goes awry on the day of the job. Considered one of the last bona-fide noirs, those in the mood for a tense, intelligent crime caper will like these Odds.

Of Gods and Men