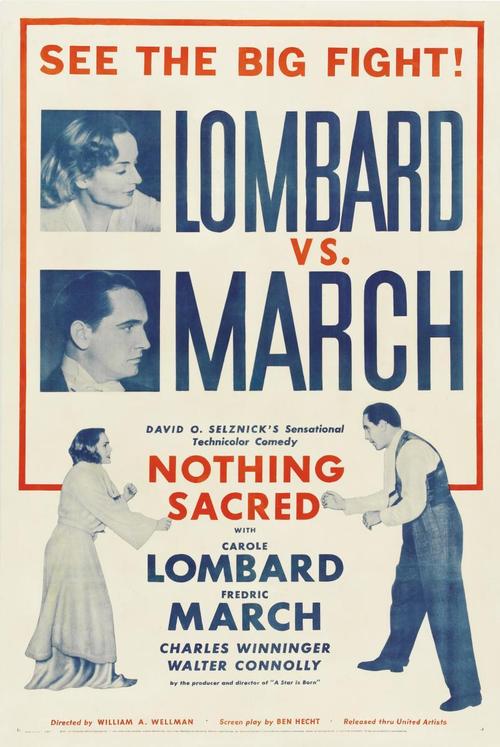 New York reporter Wally Cook (March) is eager to redeem himself after being demoted for fabricating a story. He talks his editor (Connolly) into letting him profile Hazel Flagg (Lombard), a young Vermont woman dying from radium poisoning. With much fanfare, Wally brings her to the Big Apple, where the town quickly falls in love with her. There's just one wrinkle: her diagnosis was found to be incorrect, and Hazel knows it — but she simply can't resist an all-expenses-paid vacation to New York. Meanwhile, she and Wally start to fall for each other, but will their love (and his career) survive when the truth comes out?

Penned by Ben Hecht with assistance from a bevy of celebrated writers (including Ring Lardner, Moss Hart, and Budd Schulberg), "Nothing Sacred" is a biting, satiric screwball comedy of the first order. Though it seems everyone in the story is guilty of something, this fast-paced howler maintains a tone of frothy, good-natured fun throughout. With her irresistible charm and peerless comic timing, Lombard is a forgivable fibber, and the versatile, fast-talking March is equally appealing. Watching this fully-restored classic (in early Technicolor, no less), we're reminded why screen comedies like this still enjoy near-sacred status.