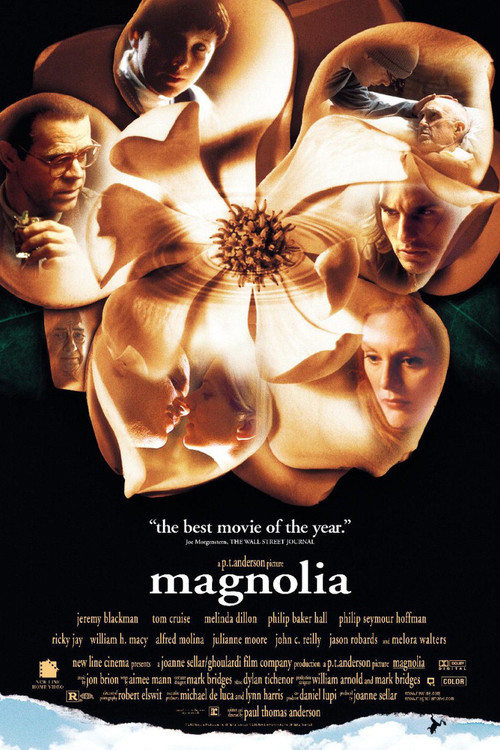 In the San Fernando Valley, a male nurse (Hoffman) caring for a dying media titan (Robards) tries to contact macho sex guru T.J. Mackey (Cruise) to tell him about his estranged father's fading condition. Meanwhile, an ailing TV quiz-show host, Jimmy Gator (Hall), hopes to reconnect with his drugged-out daughter (Walters), who's being courted by a tender-hearted cop (Reilly) in this sprawling drama of intersecting lives and fortunes.

Anderson's magnum opus is an ensemble film like none we've seen since the heyday of Altman (who's clearly an inspiration here). Each member of the impressive cast, including Julianne Moore as a pill-popping wife and William H. Macy as a grown-up child celebrity, bring an angst-filled depth to the themes of personal and familial dysfunction that have defined Anderson's work since "Boogie Nights." Plus, playing a misogynistic motivational speaker, Cruise registers with one of his most powerful performances ever. "Magnolia" is a revelatory, emotionally cathartic film full of energy and a robust enthusiasm for cinema. Despite a final, overwrought plague sequence which blunts its overall impact, this film remains a breathtaking psychological drama, full of twists, turns, and sing-songy surprises.