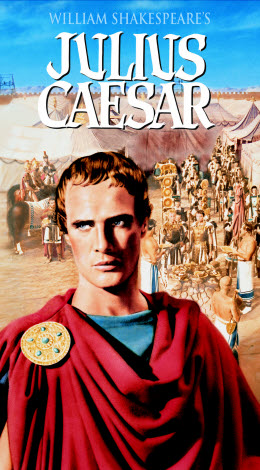 Troubled by the unchecked ascension of statesman and military hero Julius Caesar (Calhern), Roman senator Cassius (Gielgud) conspires with fellow politicians Casca (O'Brien) and Brutus (Mason) to assassinate the power-hungry despot. After they carry out the deed on the Ides of March, Caesar's bosom friend Marc Antony (Brando) elects, for the good of the republic, to throw in his chips with the schemers. Or does he?

Mankiewicz's quintessential, star-studded adaptation of Shakespeare's tragedy is a lavish, Oscar-winning production. Gielgud, Mason, O'Brien, Greer Garson, and Deborah Kerr all shine in their respective roles. And Brando, fresh off his success in "A Streetcar Named Desire," puts the mumbling Stanley Kowalski out of mind as he yelps "Let loose the dogs of war!" and intones Antony's unforgettable funeral speech with a gravity befitting the role. Worlds better than other screen versions, and one of the finest meditations on personal versus public ethics, "Julius Caesar" deserves your adulation.