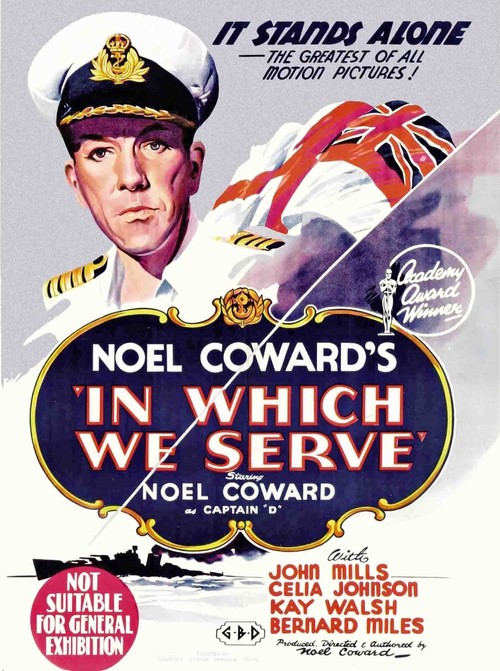 In Which We Serve

Based on the wartime exploits of his friend Lord Louis Mountbatten, co-director/writer Coward (in a most atypical role) plays Captain Edward Kinross, commander of the destroyer HMS Torrin, which is sunk by the Nazis. As Kinross and his small remaining crew cling to a small raft in hope of eventual rescue, we experience the recent lives of each survivor via flashback; notably, Kinross himself and one Seaman Shorty Blake (Mills).

With Britain in the pit of the Second War, playwright Coward was desperate to do a morale-boosting film, and "Serve" was the inspired result. The normally effete Coward is appropriately "stiff upper lip" as Kinross, and a young Mills stands out in a first-rate ensemble cast which also includes Bernard Miles and Celia Johnson as Coward's wife. (Also look fast for a young Richard Attenborough!) With Coward at the helm as writer, star, and score composer, David Lean handling most of the directing (and all the editing), and future director Ronald Neame the cinematography, the result is one of Britain's very finest war films, which accomplished everything Coward set out to do for his country.

In a Lonely Place