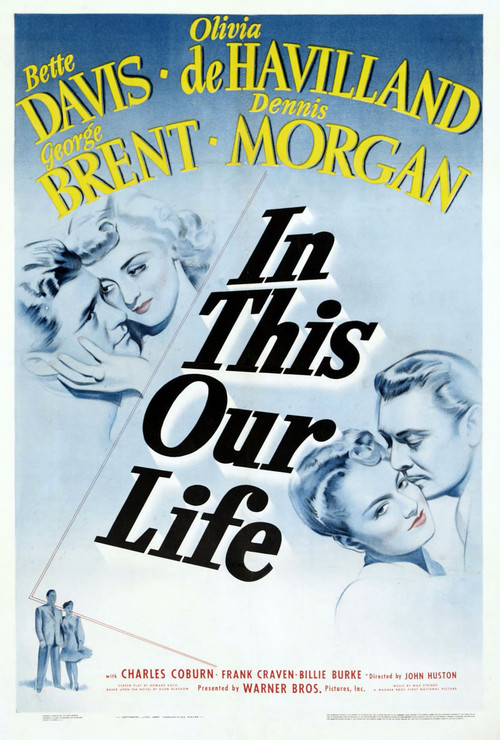 In This Our Life

A spoiled, conniving young Virginia woman, Stanley (Davis), has seemingly spent her life wreaking havoc on those around her, especially her kinder, gentler sister, Roy (de Havilland). After Stanley scandalously dumps her own fiancé, Craig Fleming (Brent), and runs off to start a new life in Baltimore with Roy's husband Peter Kingsmill (Morgan), Roy and Craig nurse each other's wounds and eventually get together. When the scheming Stanley returns home after driving Peter to suicide, the simmering resentment between the two women threatens to explode — especially after Stanley makes another play for Craig. Then Stanley gets involved in a hit-and-run that she callously blames on a young African-American man. She expects her adoring rich uncle (Coburn) to extricate her from this latest mess, but this time Stanley may have gone too far.

TThis gloriously over-the-top, compulsively watchable soaper was Huston's follow-up to his smash hit debut "The Maltese Falcon." Though the setting and genre of this film differ from its predecessor, both share the same exhilarating, dark heart. The vile, juicy part of Stanley was tailor-made for Davis, while de Havilland is ideally cast as her decent, demure, long-suffering sister. Even when the plot takes its surprising third-act turn, weaving in a racism theme that is progressive for its time, Huston keeps a strong handle on the sensational material. "This Life" remains a guilty pleasure — it's melodrama done right from Hollywood's Golden Age.

In Which We Serve