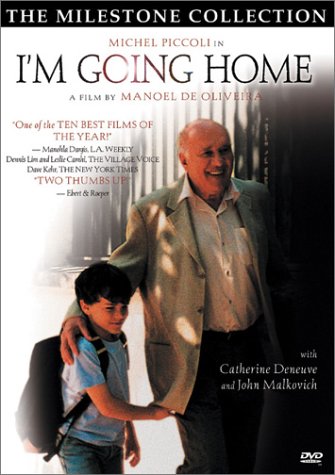 Gilbert Vance (Piccoli) is an aging, well-respected actor starring in a stage production of “Exit the King” opposite beautiful Sylvie (Leonor Silveira). Then he receives devastating news: his wife, daughter, and son-in-law have all been killed in an auto accident. Assuming guardianship of his grandson, with whom he develops a close bond, Vance returns to work in a screen version of “Ulysses” directed by priggish American filmmaker John Crawford (Malkovich).

Manoel de Oliveira’s elegiac "I’m Going Home" avoids the usual clichés of the bereavement film, focusing instead on the courage, dignity, and resolve of a serious actor attempting to revive his daily routine in the wake of tragedy. Serene and poignant, “I’m Going Home” resolves on a wistful exit sequence, which speaks to the fears and frailties of the human heart.