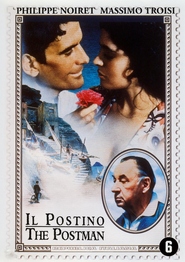 When the famous Chilean poet Pablo Neruda (Noiret) arrives at a small Italian island to escape political problems back home, he is befriended by Mario (Troisi), the local postal carrier who idolizes him. Neruda is aloof at first, but eventually warms to the young man, engaging him in conversation about love and politics, then helping him win the heart of gorgeous Beatrice (Cucinotta), the woman of his dreams.

Radford's touching story about a shy postman angling for love was met with worldwide acclaim upon its release in 1995, earning an Oscar nod for Best Picture, quite unusual for a foreign film. Sadly, Massimo Troisi, the heart and soul of "Il Postino," died the day after shooting ended, and never got to enjoy the fame that his role would stoke. At least his gentle, indelible performance remains, along with Neruda's gorgeously romantic verse. Sweet, humorous, and poignant, "Il Postino" delivers.