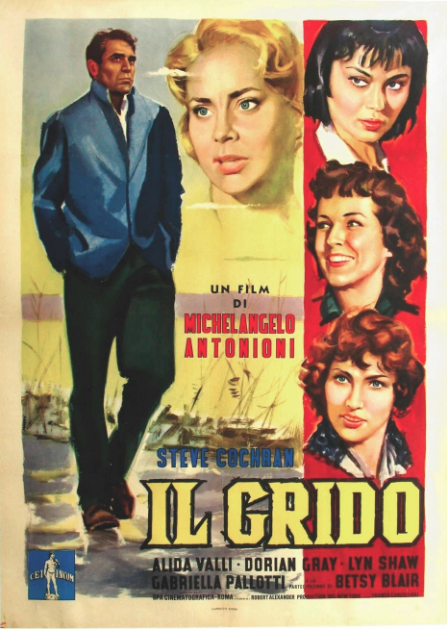 Aldo (Cochran) has lived with Irma (Valli) for seven years, and they have a daughter, Rosina (Girardi), together. But when her estranged husband dies, she refuses to legitimize their union, declaring that she has fallen in love with someone else. Crushed, Aldo leaves town with Rosina. He visits old girlfriend Elvia (Blair), but she rejects him when she realizes that he has been dumped by Irma. Aldo then drifts around looking for work and finds casual comfort with other women. But he is consumed by thoughts of Irma and eventually returns to see her.

Three years before his masterpiece “L’Avventura,” Antonioni co-wrote and directed this tragic romance set against a grim background of social hardship in post-war Italy. Cochran, an American actor known for playing Hollywood heavies (notably opposite James Cagney in “White Heat”) gives his most affecting performance here; despite being dubbed in Italian, he effectively conveys this working-class protagonist’s growing alienation. Shot in the Po River delta, the gray countryside and semi-industrial landscapes reflect Aldo’s deteriorating state of mind as well as Italy’s economic crisis. With an ending you won’t soon forget, “Il Grido” (“The Outcry”) is a plaintive lament for lost love.