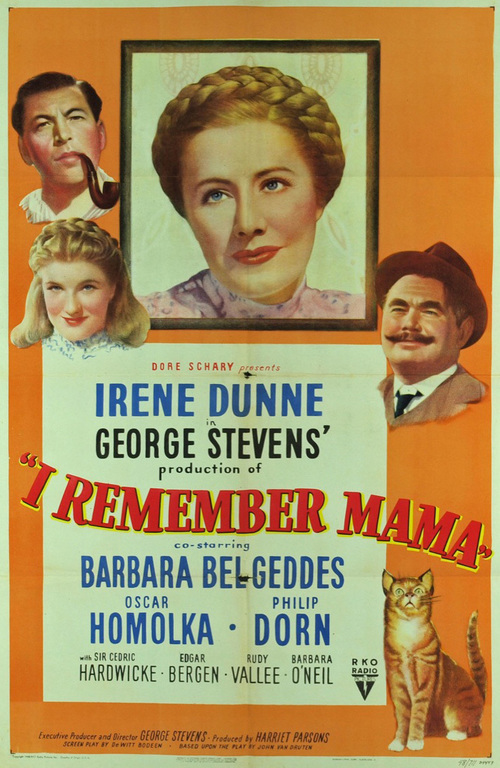 Revisiting the trials and tribulations of a struggling Norwegian immigrant family in turn-of-the-century San Francisco, this charming drama follows the efforts of a tireless matriarch (Dunne) to keep her household in order as finances remain tight. Meanwhile, an endless parade of off-kilter friends and relatives traipse through, including Uncle Chris (Homolka), Dr. Johnson (Vallee), and erudite boarder Mr. Hyde (Hardwicke).

Based on a hit play adapted from Kathryn Forbes's autobiographical story collection, this precious, poignant film is suffused by an aura of nostalgia. Narrated in flashback by younger daughter Katrin (Bel Geddes), "Mama" is a heartwarming step back to a time when happiness and hardship mixed in equal measure. The Oscar-nominated Dunne is terrific as the domestic dynamo, and Bel Geddes — destined to become a matriarch herself on TV's "Dallas" — lends a warm, innocent presence. The pride and joy of this "Mama" also lies in a sterling supporting cast, especially Homolka as an ornery uncle and Hardwicke's quote-spouting freeloader. Compassionate and colorful.

I Served the King of England