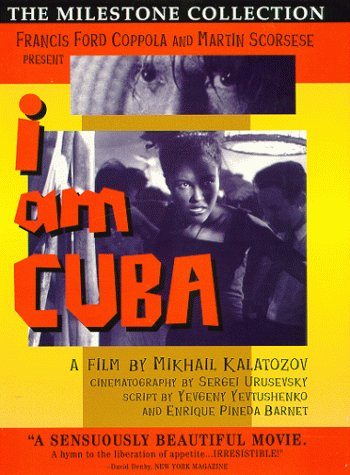 This sensuous, visually ravishing celebration of pre-revolutionary Cuba hinges on four dramatic vignettes: a beautiful woman's encounter with a crass American businessman in a Havana nightclub; a tenant farmer who loses his crop to a giant conglomerate; and two men, a middle-class student and a peasant, who join Castro's fight against the Batista regime.

Rescued from the dustbin of history by Francis Ford Coppola and Martin Scorsese and released in 1995, Russian director Kalatozov's sweeping, stylized "I Am Cuba" is communist agit-prop, to be sure — but also exhilarating, world-class art. Swooping over sugar fields, through dense forests and urban milieu of both the decadent and militant variety, Kalatozov portrays the beauty of Cuba and its people via a quartet of loose, dreamy, near-wordless stories — all set to the beat of pulsing Afro-Cuban music.