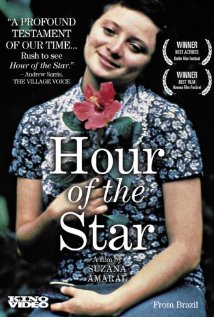 Hour of the Star

An innocent and unworldly young woman from northeast Brazil, Macabea (Cartaxo) lives in a cramped boardinghouse in the slums of Rio de Janeiro, where she works as a typist and rides the subway simply to enjoy the company of other people, especially men, with whom she has little contact. When a would-be suitor does materialize, a boorish metalworker named Olimpico (Dumont), he proves to be as coarse and lacking in tenderness as Macabea's other acquaintances.

Based on Clarice Lispectors best-selling coming-of-age novel, Suzana Amaral's melancholic drama about a doomed innocent adrift in a harsh, often hostile city boasts an extraordinarily unselfconscious performance by Marcelia Cartaxo, whose embodiment of the graceless, uneducated country girl is revealing and remarkably affecting. As unsentimental as Amaral's depiction of Macabea's banal, empty existence may be (her roommates think she smells; one tells her she's ugly), there are sparks of ripe humor to keep it from tipping into pure bathos. Ultimately, "Star" shines a light on wretched humanity, allowing one insignificant life to take on a universal brilliance.