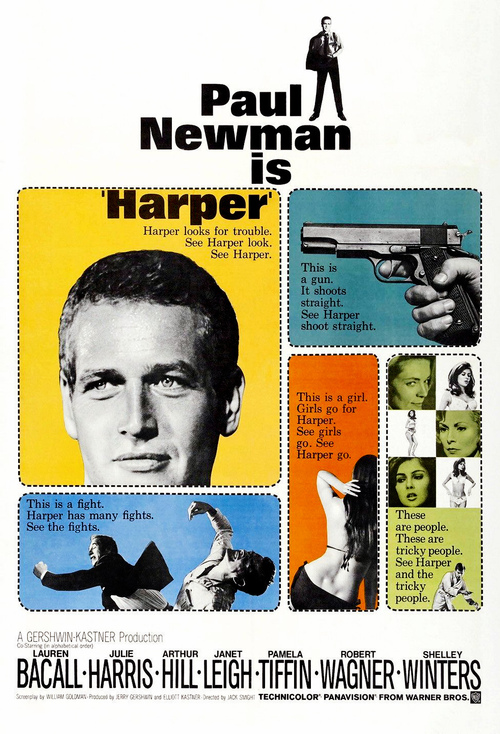 As soon as he's hired by cynical society woman Mrs. Sampson (Bacall) to find her husband, down-at-the-heels (and about to be divorced) LA detective Lew Harper (Newman) has run-ins with an odd bevy of fringe types that the missing tycoon keeps company with. Careful to avoid the comical but sincere come-ons of Sampson’s kittenish sexpot daughter Miranda (Tiffin), Harper stumbles onto a lurid and decadent underground culture that’s deadlier than it looks.

Based on Ross MacDonald's novel, this big-city thriller is notable for two reasons: it marks the debut of Newman's ultra-cool Lew Harper character (later seen to lesser effect in "The Drowning Pool"), and it was William Goldman's maiden voyage as a screenwriter. Peppered with witty dialogue and immersed in the sex-and-drugs cult weirdness of mid-sixties California, "Harper" is directed with flair by Jack Smight; and what a supporting cast, with Bacall, Shelley Winters, Janet Leigh, Robert Wagner and Julie Harris all contributing choice characterizations. Still, the center of focus here is Newman's Harper, never hipper or more determined to finish the job. Here's another chance to catch Newman in his prime.