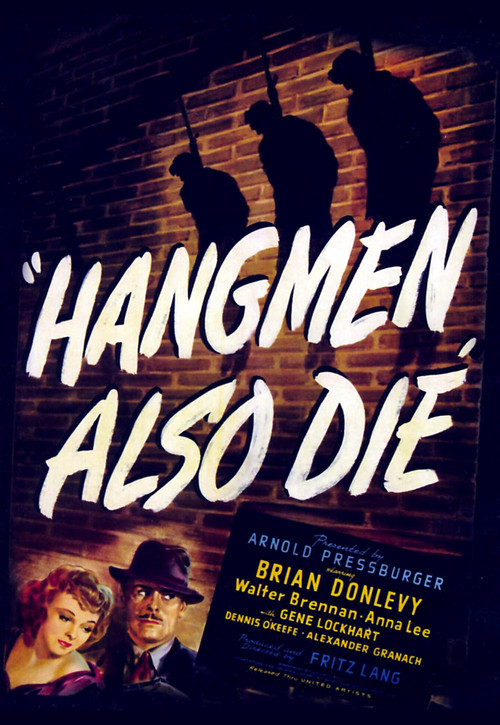 After Dr. Svoboda (Donlevy), a leader of the underground Czech resistance, assassinates a prominent Nazi minister known as "the Hangman," the surgeon seeks refuge in the home of Mascha (Lee), whose own father, Professor Novotny (Brennan) is on a short list of enemies of the Reich. Seeking revenge and obedience to Nazi rule, the Gestapo begins rounding up suspected dissidents and agitators, including Novotny. Meanwhile, they issue an ultimatum to the people of Prague: Surrender the assassin or the detainees will die.

One of the finest anti-Nazi thrillers to emerge from the WWII period, Lang's noirish approach to the propaganda film involves cloak-and-dagger intrigue, sinister interrogations, and plenty of light-and-shadow atmospherics, courtesy of camera great James Wong Howe. Such elements were second nature to German ex-pat Lang, director of "M" and "The Big Heat," and his impeccable direction of numerous character actors — a cab driver (Lionel Stander) and a fruit merchant (Sarah Padden), in particular — adds to the visceral power of this story of resistance. Brennan is also excellent playing against type as a radical patriot. See "Hangmen" or die trying.