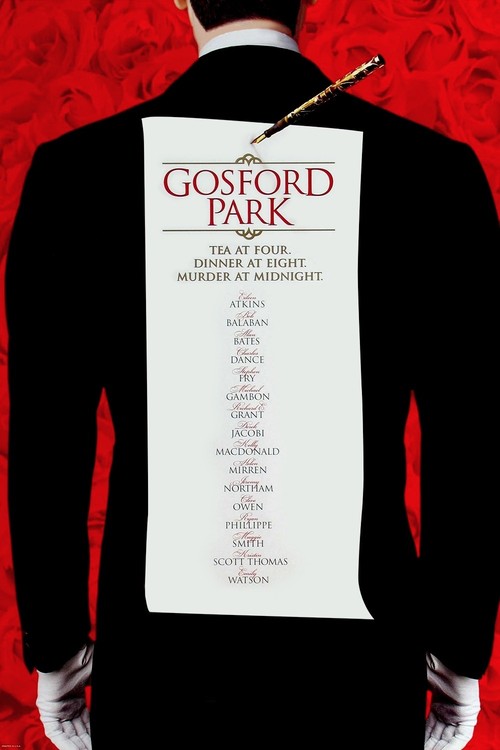 In 1930s England, Sir William McCordle (Gambon) and his much younger wife (Thomas) host a weekend hunting party for an assortment of friends accompanied by their servants. Their country manor is briskly maintained by a staff headed by housekeeper Mrs. Wilson (Mirren), butler Jennings (Bates), and valet Probert (Jacobi). McCordle is a ruthless industrialist who threatens to cut off his haughty sister, the Countess of Trentham (Smith) and others seeking financial support. But no one in the house, master or servant, is immune to jealousy, gossip, or misbehavior. When McCordle is found murdered in the study, both the wealthy and working class fall under suspicion, leading to the revelation of long-buried, shocking secrets.

In lesser hands, this atmospheric period drama would likely measure up as a diverting whodunit in the Agatha Christie mold, but the Fellowes brothers' biting, Oscar-winning script and Altman's proven skill at ensemble work help elevate it. As we observe all the subplots and intrigues — upstairs and down — we are treated not only to a juicy mystery but also a dead-on satire of the British class system. Considered by many to be Altman's finest late-career effort, "Park" received an impressive seven Oscar nods, including best picture, director, and actress (for both the devilishly funny Smith and the restrained Mirren). By turn witty and melancholy  but absorbing throughout, this "Park" is certainly worth a visit.