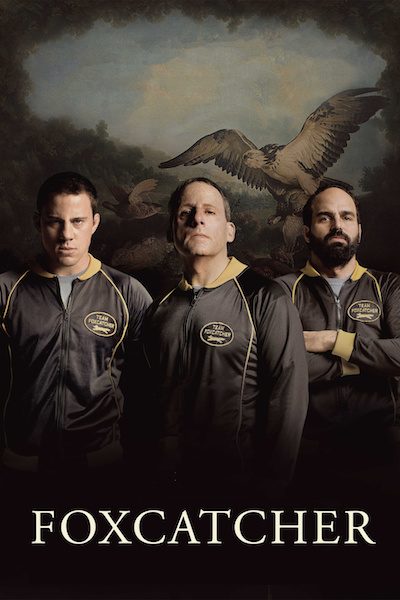 After winning a gold medal at the 1984 Olympics, wrestler Mark Schultz (Tatum) is invited by multi-millionaire John du Pont (Carell) to train at his Foxcatcher estate in Pennsylvania. Du Pont funds a successful U.S training program and recruits Mark’s older brother Dave (Ruffalo), also a gold medal winner, to coach. After a disappointing performance at the Seoul Olympics and building tension in his unusual relationship with his wealthy mentor, Mark leaves the team. Meanwhile, Dave stays on at Foxcatcher, little sensing that his life may be in danger.

Based on a chilling true-crime story, Miller’s cool lensing of the taut E. Max Frye and Dan Futterman screenplay resulted in five Academy Award nominations. Training intensively for 6 months, Ruffalo and Channing give weighty, credible performances inside and outside of the ring. Carell fully embraces his sociopathic character, making us pity du Pont even as he unnerves us. Redgrave, as du Pont’s imperious mother, is hugely effective in just a few minutes of screen time. Miller won the best directing award at Cannes for this dark foray into psychological disintegration.