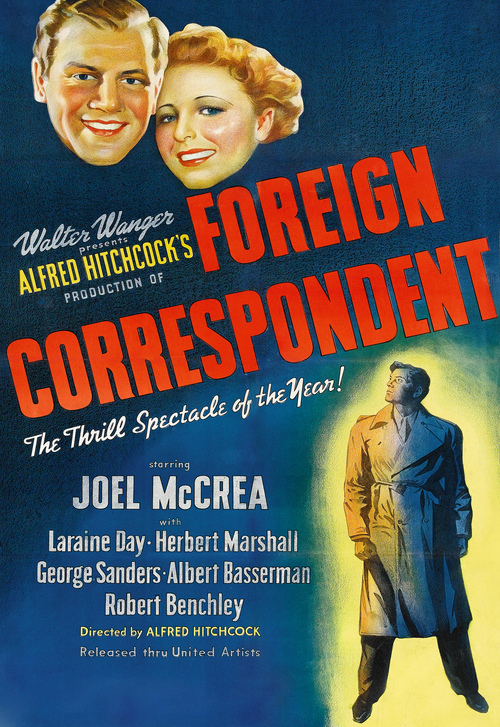 Crime reporter Johnny Jones (McCrea) is renamed Huntley Haverstock by his editor and sent to Europe as a foreign correspondent. On the brink of war and teeming with espionage, the continent is full of juicy stories — and Johnny/Huntley soon finds one. Covering a peace mission, he witnesses an assassination, and is soon onto a nefarious spy ring and wide-ranging plot to aid the war-mongering Fascists. Can this Yank in treacherous waters uncover the whole mystery and survive long enough to post the biggest scoop of his career?

This unsung Hitchcock thriller is consistently engrossing and wildly entertaining, bolstered by a first-rate script (with James Hilton and Robert Benchley contributing much of the dialogue) and a superb cast. McCrea is terrific as our chief protagonist, and Laraine Day makes for a brainy yet beguiling heroine. However, it's Herbert Marshall who steals the picture as Day's father, a man who is not what he seems. "Correspondent" is chock-full of twists and surprises, and also includes some indelible set-pieces only this director could conjure up. In particular, watch for pivotal scenes involving umbrellas and windmills. Go, Johnny, go!