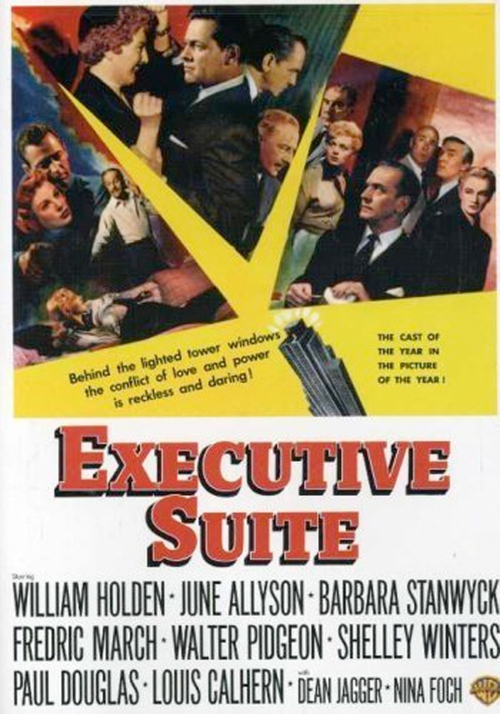 When the founder and CEO of a furniture-manufacturing company drops dead on Wall Street, his five remaining VPs are left to pick a successor before the New York Stock Exchange opens on Monday. Opportunistic accountant Loren Shaw (March) immediately anoints himself de facto chief, jockeying for power against family man Don Walling (Holden), a research specialist who doesn’t want the job, but worries that Shaw’s willing to sacrifice quality for pure profit. As the back-door dealing gets underway, Walling appeals to majority stockholder Julia Tredway (Stanwyck), the founder’s long-term girlfriend, a wild card who has the deciding vote.

In the era of the grey flannel suit, Robert Wise made “Suite,” a gripping ensemble film about business ethics that carries echoes in our own recessionary, bootstrapping times. But the real reason to see this intriguing and prescient ’50s drama is due to the sharp performances by Wise’s dream cast: in addition to Holden, Stanwyck, and March, Walter Pidgeon and Louis Calhern both turn in fine work as older execs on opposite sides of the boardroom, while Shelley Winters (as an office mistress) and June Allyson (as Don’s wife) shine, too. Pull up a chair in the “Executive Suite!”

Exit Through the Gift Shop