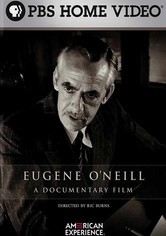 The only American playwright ever to win a Nobel prize, Eugene O'Neill stands as one of the most significant artists of the last century. The author of such famous works as The Iceman Cometh and A Moon for the Misbegotten, O'Neill was a prolific writer, who furiously churned out 20 plays in less than 25 years. Where did the passion, drive, and genius come from? As with so many artists, his greatness was actually born of pain. This fascinating film delves into O'Neill's deeply troubled childhood and angst-ridden adult life, using a creative blend of interviews, performance excerpts, and archival footage.

Most anyone familiar with O'Neill will have heard that his work was highly personal. In this illuminating and arresting documentary, director Ric Burns shows us just how personal, focusing on the striking parallels between the writer's anguished life and work. O'Neill's ability to expiate his own inner demons through his art came at a terrible cost. Though he achieved fame and renown, he could not enjoy it; indeed, his tortured creative process drove him to drink and a premature death. However, as evocative readings by Al Pacino, Vanessa Redgrave and Jason Robards make abundantly evident, he left behind quite a legacy.