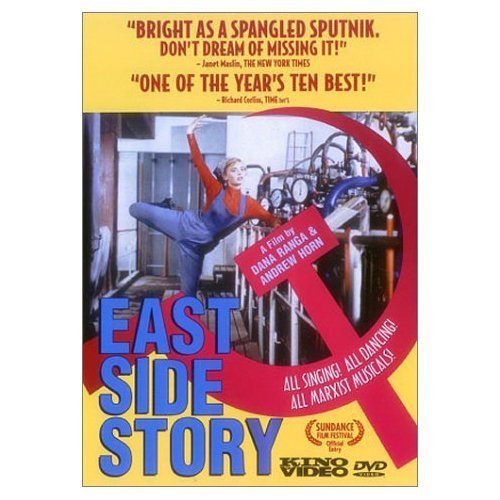 In interviews with actors like Karin Schroeder, the Doris Day of the East, and technicians from East Germany's DEFA studio, Ranga's wholly unique feature celebrates the surprisingly buoyant musical comedies produced behind the Iron Curtain until the late 1960s. We learn not only about the circumstances under which these toe-tapping Soviet confections came to be (fusing bits of Chaplin, Busby Berkeley, and "Beach Blanket Bingo"), but view the clips themselves, in all their heroic verve and hammer-and-sickle weirdness.

Little seen by Western audiences, goofy propaganda musicals like "Volga, Volga" (which Stalin himself watched over 100 times) and the proto-feminist fantasy "My Wife Wants to Sing" were clearly inspired by Hollywood's Golden Age productions, which were often banned but still seen by many. As "East" makes abundantly clear, Soviet censors distrusted "mass entertainment" and anything that didn't adhere to the mandates of socialist realism, the only officially valid art form. What these directors managed to concoct under repressive guidelines and with relatively poor equipment is stunning to behold. Don't miss this entertainment extravaganza, comrade!