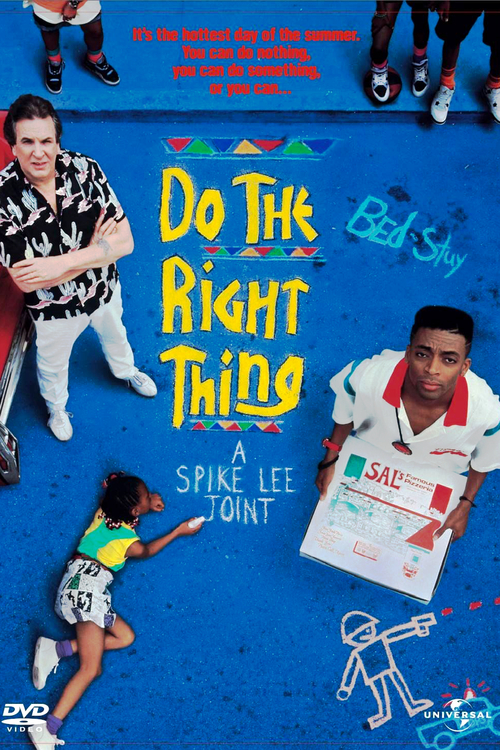 Do the Right Thing

On one of the hottest days of summer in Bedford-Stuyvesant, pizza deliveryman Mookie (Lee) grudgingly goes about his chores for Italian-American owner Sal (Aiello), whose two sons, the openly bigoted Pino (Turturro) and more equable Vito (Edson), help him run his pizzeria in the heart of this mostly black and Latino neighborhood. As the mercury rises, local residents like boozy elder Da Mayor (Davis) and crabby widower Mother Sister (Dee) try to stay cool and do as little as possible. But tempers soon flare over seemingly minor incidents, and long-simmering racial animosities on the block get ready to explode.

A brilliant, thought-provoking view of contemporary race relations, Lee's breakthrough feature powerfully articulated the kinds of sentiments that were (and still are) verboten in mainstream Hollywood movies and polite social discourse. Shot on location in Brooklyn's famous Bed-Stuy neighborhood, this explosive film is a tour-de-force work of innovative cinematography, confrontational dialogue, and first-rate acting from the ensemble cast. Standouts are Rosie Perez (as Mookie's petulant Puerto Rican girlfriend) and Giancarlo Esposito (as Buggin Out, the comically radical activist whose boycott of Sal's causes tensions to boil over). Smart, funky, and in your face, "Do the Right Thing" is a bold film that really will make you sweat.