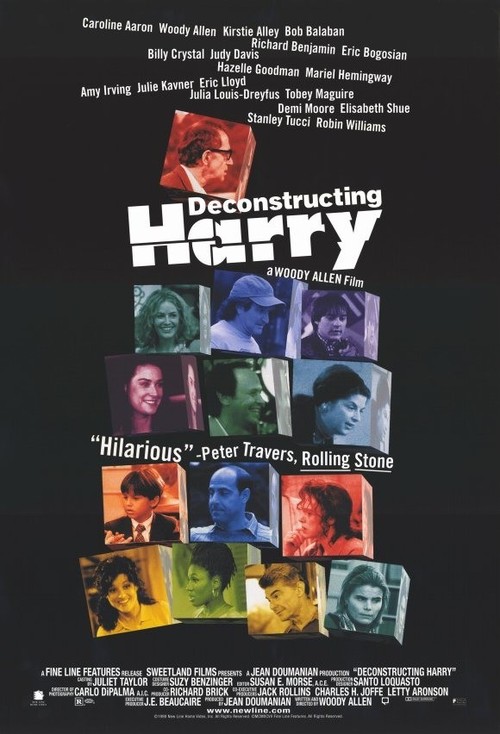 Harry Block (Allen) is a successful novelist with three ex-wives, an on-going series of analysts, and countless neuroses. And his life may just be coming apart at the seams. He is visited by his sister-in-law (Davis) who's furious that he's used their illicit relationship as source material for one of his books. In fact, all of Block's writing borrows freely from his rootless, philandering lifestyle, as he seems unable to find inspiration anywhere else. As Block prepares to be honored by his Alma Mater, he starts to struggle with writer's block, and the line between his life and his fiction becomes increasingly blurred.

Prolific writer/director Allen risks a measure of self-deconstruction with every neurotic, semi-autobiographical character he plays, but here he gives his story (and his alter-ego) some extra coarseness and bite, which is actually welcome. Using a jarring, jump-cut style to reflect Harry's jagged state of mind, Allen broaches familiar themes, mining his near-crippling obsessions with death, sex, and religion. He skillfully weaves Harry's memories and reveries into the story, which facilitate a range of amusing celebrity cameos. The cast is universally good, with extra kudos to Bob Balaban as a (very) sick friend, Kirstie Alley as Harry's former therapist and ex-wife, Robin Williams as outof-focus man, and Billy Crystal as an extremely dapper devil. The premise of an artist taking stock of his life may be borrowed from Bergman or Fellini, but Allen brings his own comic flair and philosophical musings to the proceedings. Here's to "Harry"!

Defying the Nazis: The Sharps' War