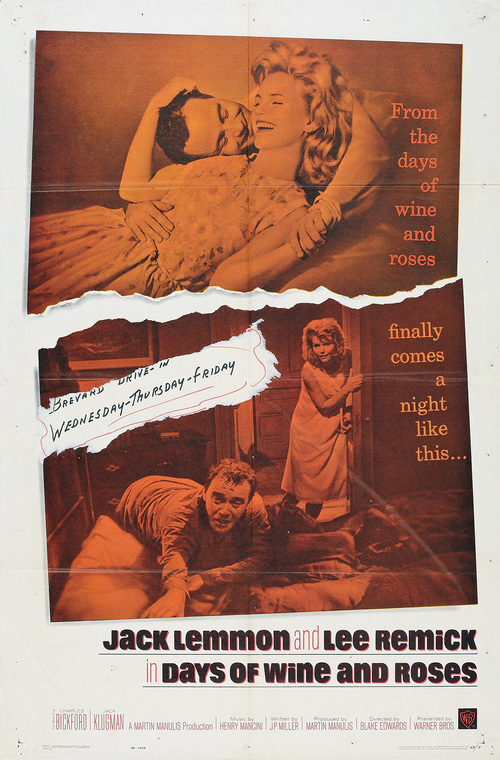 Days of Wine and Roses

After an awkward meeting at a boat party seems to put them at odds, publicist Joe Clay (Lemmon) and Kirsten Arnesen (Remick) fall madly in love. The social and professional demands of the public-relations racket are nothing new to Joe, but gradually he turns tee-totaling Kirsten on to the pleasures of swilling cocktails at any hour. Over time, alcohol becomes integral to the young newlyweds' relationship, and threatens to destroy their blissful existence.

A downbeat love story pickled in bile and booze, this melodrama of addiction, by the great Blake Edwards, skirts the same terrain as "Lost Weekend" without ever getting preachy. Instead, Edwards examines the sullied yet undying connection between his two self-destructive protagonists, played by Lemmon and Remick with unblinking honesty. (Two specific scenes — his in a madhouse and hers in a motel — are wrenching.) Charles Bickford lends terrific support as Kirsten's widower father, as does Jack Klugman in a small role as Joe's AA sponsor. "Days" is a hard-hitting drama about love in the ruins, buoyed by Henry Mancini's melancholic jazz score.