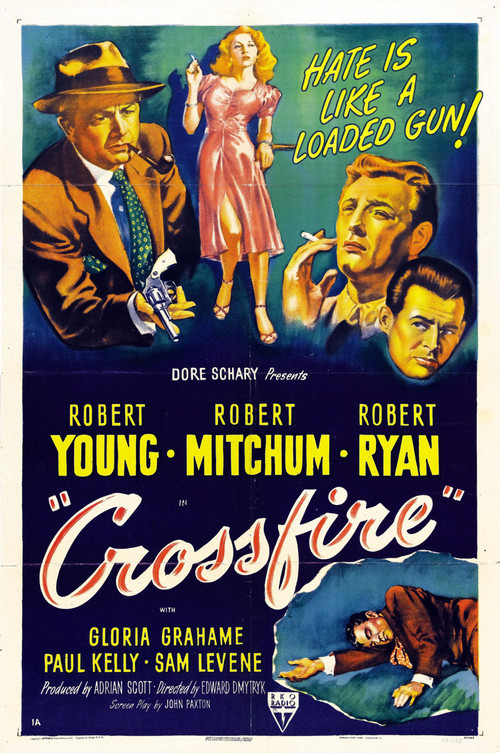 Three war veterans (Mitchum, Ryan and Brodie) meet up in a bar with civilian Joseph Samuels (Levene), and after a few rounds, drunkenly follow Samuels back to his apartment to raid his liquor cabinet. When Samuels is later found beaten to death, Police Captain Finlay (Young) is called in to investigate. It's quickly apparent that one of the soldiers did the killing, but which one? And just as puzzling, what could be the motive for such a brutal crime?

This gripping, intricate thriller boasts an intelligent script and atmosphere to spare. The actors turn in solid performances all around, particularly from the Oscar-nominated Ryan and Grahame, as well as Young. This film, which also snagged an Oscar nod for Best Picture, remains as biting a condemnation of anti-Semitism as the better-known "Gentleman's Agreement," released the same year. Assured direction from the soon-to-be blacklisted Edward Dmytryk makes this an unheralded classic. Don't duck in this "Crossfire."

Crossing The Bridge: The Sound of Istanbul