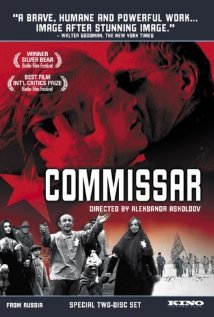 In 1922, as a civil war between the Reds and Whites ensues in the aftermath of the Bolshevik revolution, hard-hearted commissar Klavdia (Mordyukova) moves into the home of a poor Jewish family as she awaits the birth of her child. Haughty and indifferent to the concerns of the Magazaniks, Klavdia soon warms to the genial spirit of father Yefim (Bykov), becoming an “auntie” to his six children.

Shelved for two decades by the Soviets, who disapproved of Askoldov's stern view of war and his progressive attitude toward anti-Semitism and women's rights, “Commissar” is a heart-wrenching and compassionate war drama dealing with atrocity, poverty, motherhood, family life, and racial persecution. Askoldov's dynamic black-and-white CinemaScope images pay homage to the old masters of Soviet cinema, and Mordyukova and Bykov anchor the film with memorably physical performances.

Common Threads: Stories from the Quilt